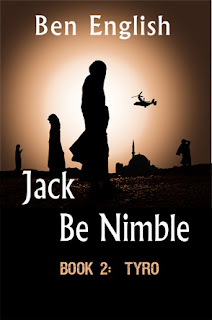 The adventure that began in fire and terror in the night sky over London has brought Jack Flynn and his friends together again, to strike a blow against the forces of a brilliant, sadistic technologist bent on unspeakable destruction. Yet a single blow by itself has not turned the tide of this secret war, and Jack must divide his team to realize any chance of defeating the hidden army arrayed against them.

Mercedes Adams evades the assassins sent against her only to be visited by a more dangerous, intimate threat from her past. As her path brings her closer and closer to Jack—on a mad dash from Paris to San Francisco to Los Angeles to Havana, Cuba—Mercedes discovers the hope of survival and salvation in the lessons learned years ago in the freshness of youth, lessons learned by an eager boy, a maverick, an earnest novice…a Tyro.
What I love about this series and why I will continue to keep reading them, is the characters. I enjoy the interaction between all of the characters, if they are the bad guys or the good guys. They all are incredibly well-rounded in which I mean the reader gets to know and learn about each of the characters as if they were carrying the story alone. But they don't, these books are told from different perspectives.
Also we get to travel around the world, from Paris to San Francisco and Cuba. I enjoy that we get a little bit of historical background into the cities , it's as if the settings are a character of their own.
You'll get a little bit of everything that the first book introduced as well, some international political conflicts, spys with fast and fancy toys, advanced technology and the heart of the story, great characters.
This author will appeal to fans of James Patterson and Dan Brown.

Posted by Krista Cubicleblindness at 12:16 PM